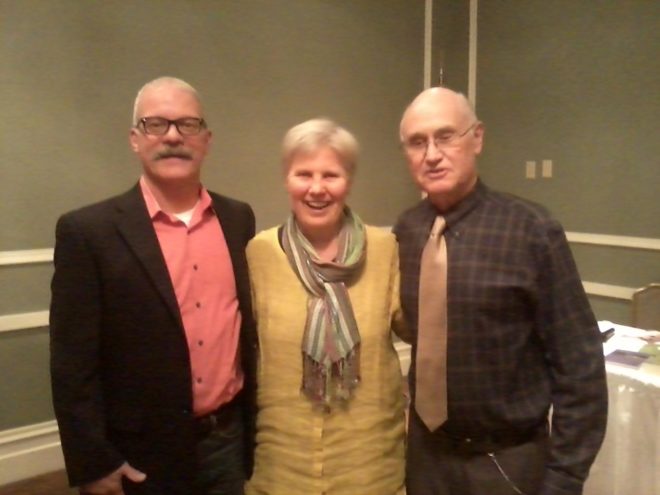 It’s with a heavy heart that we learn of the passing of long-time Davenport Central English teacher and inaugural Poet Laureate of the Quad Cities Richard “Dick” Stahl.

Dick was supremely devoted to poetry, to his craft, and sharing his love of writing with as many people as possible. He was deeply curious and ferociously kind. He was a master educator—in classrooms as well as in poems—and his commitment to developing his writing never stopped growing, changing, adapting, incorporating new elements while remaining true to his voice, a singular one in the rich literary history of Quad Cities.

While many writers have used this place as their canvas, their materials, and their muse, Dick carried forward a devotion and care for this place and its people—from the ceremonial to the everyday—that resonate throughout his entire body of work, which stands as a model for how we might also celebrate the place we are and the people around us with words as well as action. He will remain an inspiration to us and our work always.

We send our love to his wife Helen, their entire family, and the legions of people whose lives he made brighter.

“Dick Stahl, 80, passed away Wednesday, February 19, 2020 in his home. Visitation is 3 – 6 pm on Sunday, February 23 at the Runge Mortuary. Funeral service will be 10 am Monday at St. Paul Lutheran Church in Davenport. Burial in Davenport Memorial Park. In lieu of flowers, memorials may be made to St. Paul Lutheran Church, Midwest Writing Center, German American Heritage Center& Museum.

Dick was born in 1939 to Donald and Elta Stahl in Davenport. He graduated from Davenport High School in 1957, Augustana College (B.A. in English) in 1963, University of Iowa (M.A. in English) in 1970 and Western Illinois University (Ed.S in administration) in 1981. In 1964 he was drafted in to the Army serving in Baumholder, Germany. He taught English for 34 ½ years at Central High School (his alma mater). Dick married Helen Moretz on June 29, 1968 in Princeton IL. Dick wrote poetry about his love of the Mississippi River and the Midwest. His four books of poetry include After the Milk Route, Under the Green Tree Hotel, Mr. Farnam’s Guests, and Bluffing. He served as the Quad City Arts first Poet Laureate from September 2001 to September 2003. He received the Augustana Alumni Award in 2002 and was inducted into the DHS/CHS Hall of Honor in 2013. Dick is survived by his wife Helen; children, Renee Dunn of Highlands Ranch, CO, Randy Stahl Englewood, CO and Rita (Steve) Hart Davenport, IA and five grandchildren; sister Dr. Donna Stahl Cincinnati, OH. He was preceded in death by identical twin daughters Collette Kay and Carol Ellen Stahl and his parents.”