Throughout the month of December, MWC will share a series of posts from Board Members, patrons, volunteers and local authors about their experiences with the Midwest Writing Center and what it means to them. MWC is fortunate to have a private donor who will match any contributions received during our Giving Tuesday campaign throughout the month of Decembers dollar-for-dollar with a contribution to our endowment, up to $5,000. Please consider supporting MWC with a donation online, over the phone, or via USPS.

We are thrilled to present this first post in the series from MWC’s current President of the Board of Directors, author/editor, and owner of Wordsy Woman Jodie Toohey: 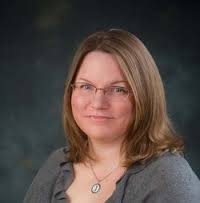 I was first introduced to Midwest Writing Center at least a decade ago when I happily saw my daughter become interested in writing (sadly, her interest has waned). I emailed MWC to ask about children’s writing workshops; they didn’t have any scheduled at that time but they added me to their newsletter list. After that initial contact, I went back to my paralegal life, raising children and not doing much writing; then 2007 rolled around and I decided to publish my pre-teen and teen (heavily revised) poetry into a book I called Crush and Other Love Poems for Girls. When I was looking for places to hold appearances for Crush, MWC welcomed me and offered to take a few copies on consignment.

The first MWC event I attended was the spring, 2008, Pen In Hand. I walked in that morning to a workshop with Robin Throne and I immediately felt at home. In the words of fellow writer and friend, Joanne Wiklund, I’d found my people. Robin even graciously purchased a copy of Crush that I’d put on consignment. Over the next couple of years, I attended a couple of workshops, including the David R. Collins Writers’ Conference in June. Starting in 2010 when I left my paralegal job to go solo, I became gradually more and more involved in MWC. I started out assembling packets for the Collins conference and then moved on to the programming committee. Eventually, I gave a beginning creative writing workshop and was referred editing jobs; in both cases, those from MWC had more confidence in my abilities than I did, and after I completed them and they went well, my confidence grew. After a while, I served as the chair of the marketing and publicity committee; at that time, I thought if I was chairing a committee, I might as well join the board. So I did. Later, I was elected to Vice President and most recently in the spring of 2015 to President of the board. In the meantime, I published three more books – Missing Emily: Croatian Life Letters, Melody Madson – May It Please the Court?, and Taming the Twisted – and 918studio published one – The Other Side of Crazy.

The opportunities MWC has provided me go way beyond those of leadership by chairing committees and serving as a board officer. MWC has given me an opportunity to write; to hone my craft. And to share what I’ve learned with others by leading several workshops, a Veterans writing group, and a 6-part book marketing workshop series. MWC has given me community. I’ve always felt at home with MWC; I somehow connect with other board members, event participants, other MWC volunteers, and everyone I meet because of MWC. I think it’s the shared passion for the written word that binds us together, whether as writers or readers (or both). Since I attended my first MWC workshop, my introversion weighing on me and my confidence in the toilet, I have grown so much. I can’t even put into words how much (and I’m supposed to be a writer).

That’s why, despite my aversion to cold-calling and asking people for money, I’m helping to spread the word about MWC’s #GivingTuesday campaign (and, of course, giving myself). I hope that you will give, too, to ensure MWC can continue to help writers, readers, and others like me in the near and distant future.