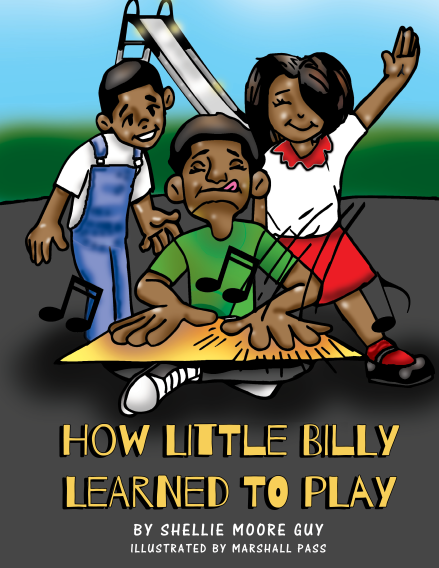 Written as a tribute to musician Bill Bell (1936-2017), How Little Billy Learned to Play, follows a young, fictionalized Bill Bell as he learns to play music in the Watertown neighborhood of East Moline, IL where he grew up.

Join “Little Billy” as he learns to play Hambone from his Uncle Ferdinand, jams with other famed East Moline musicians Esther Clark and Mallie Williams, and learns where the rhythm comes from.

Printed by Modern Woodmen of America, this book is the first of its kind published by MWC Press, and is also 100% a product of the Quad Cities. How Little Billy Learned to Play celebrates our local music and cultural histories in a way that’s fun & engaging for children and parents alike.

Shellie Moore Guy will be performing at a variety of venues around the Quad Cities in support of the book, including at the first Community Conversations event at the Rock Island Public Library on October 24.

HOW LITTLE BILLY LEARNED TO PLAY is available at the Midwest Writing Center’s offices, directly from the author and illustrator, and online via the MWC Press store. Please contact MWC for info on discounts for bulk orders, educators, and youth service organizations.